A Quarterback of Tomorrow 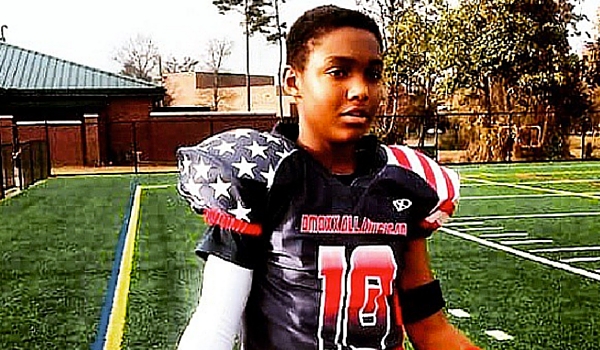 Cancer took the lives of an estimated 1,930 people in the state of Delaware in 2012. The disease affected over 4,000 more.  On August 6th 2012, just before football season, Chad Jones II became a statistic.  At age 11, he was diagnosed with Stage 4 neuroblastoma.

Prior to the news the Jones family received that Saturday, Chad was 6th grader through and through. He went to school, played sports, and rarely made his bed. He played quarterback like a professional and had a complementary, Hollywood smile.

Before the diagnoses, his toughest obstacle was completing passes over the heads of his linemen (thus his rollout throws being on the money). Among his Pop Warner team, Chad was a diamond in the ruff. A quiet, stoic soul who, paired with his movie-star smile, maintained leadership, humility, and one heck of a throwing arm. Touch passes, long balls, and short darts; the kid can toss flat-out dimes.

During a practice, I watched him thank each receiver that caught his throws and pick up the heads of those who didn’t. It was altruism, in a sense, and very Andrew Luck-ish. How many adults practice altruism or even know what it means? But, that’s just who Chad is, a kid who loves football and loves playing quarterback.

Alas, in 2012, God or fate had other plans. He wasn’t able to play football or quarterback. Cancer stripped him of his weight, hair, and energy. Amid constant clinical procedures like radiation and chemo (which are two trials I wouldn’t wish on my worst enemy), Chad found hope and fight. Kind of how Tom Brady does, down by 6 with a minute left and all who are watching get the inevitable craving for a game-winning touchdown drive.

Two months into battling the dreaded disease Chad mustered up the might to go check out his squad. Escorted by his father, Chad walked towards the practice field illuminated by a glow like Derek Jeter walking through Yankee Stadium. He wore a smile giant enough to make the Chesire Cat jealous. That’s pretty big. Of course, though, he was back, back on the field, back with his teammates, back … home. I would be stoked too.

Chad took on the persona of Tim Tebow and delivered words of encouragement to his teammates just before his return to the hospital. He lifted them up as they did him. This one is for the Gipper. No, it’s for Chad.

What a tough year that was for the Jones family. The support, however, did not go unnoticed. Quadree Henderson, current WR at the University of Pittsburgh (in high school at the time), changed his number to that of Chad’s, 10.

“Since he wore number 10 I wanted to wear it too so he knew we were in this fight together. I fell in love with the number because of him and I’ll continue to wear it for him.” – Quadree Henderson, WR University of Pittsburgh

Now in 2016, on college football Saturdays, you will find number 10 suited up for the Pitt Panthers and understand that the number, and the game, mean a little bit more.

Following the year of pain, struggles, weariness, and no football, Chad completed treatment on September 9th 2013 and was declared cancer free. Whew!

A prolonged moment of relief is what most families would feel after such a trying battle. Chad, the Jones’, and the rest of his football family settled, rather, for a sentiment of thankfulness and a, “ok, let’s go to work,” attitude.

Well, Chad went to work. In his last two years playing Pop Warner he earned offensive MVP and All-American honors. Now, at age 14, a freshman in high school, and cancer free, he has the world in front of him; and he knows it. Chad recently completed his first season of high school football earning the Freshman of the Year Award and 2015 Academic All-State honors.

Now you know Chad Jones II. Remember him. Remember his fight and perseverance cause the moment you witness his smile, you’ll never forget him. The magic of the 10 isn’t over. It’s just beginning.

Q: What does the sport of football mean to you?

A: “Football teaches you how to cooperate with others. It teaches you life lessons and it is a way I can get a college education.”

Q: Why do you play the quarterback position?

A: “Being a quarterback is all about humbleness and composure. You have to withstand the intensity of the game and manage the ups and downs. You can’t get overjoyed when you throw touchdowns, that’s what you’re supposed to do.”

Q: Did cancer teach you anything, what did you learn from it?

A: “From cancer I learned that life is too short to waste any moment. You have to take advantage of every opportunity because not a lot come around.

Q: What are your goals, what do you aspire to become?

A: “My current goal is to maintain honor roll throughout high school and graduate. Then, earn a scholarship to college and play football. Then, get drafted to the NFL.”

Q: Do you have any advice to other kids or adults, for that matter, who are battling cancer?

A: “My advice to others battling cancer is to always have a positive attitude and outlook. No matter what.”