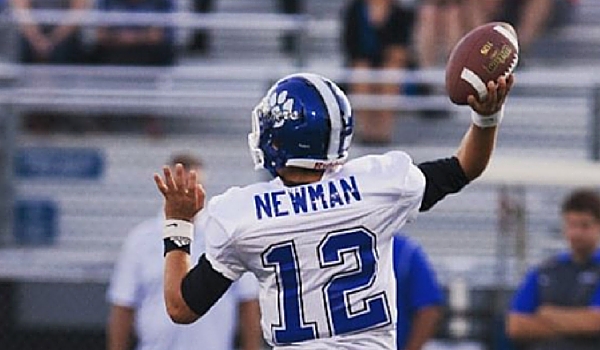 Philip Rivers (San Diego Chargers), Derek Carr (Oakland Raiders), or either of the 49ers quarterbacks didn’t throw the most touchdowns in the state of California in the 2015 season. And neither did Jared Goff (Cal), Josh Rosen (UCLA), or Cody Kessler (Southern Cal). Heck, the quarterback that did can’t even drive his date to the prom yet.

He is 15-year-old Jack Newman. The junior, c/o ’17, from Analy HS in Sebastopol, CA tossed 53 aerial scores in route to maybe the best quarterback play in the state. Cal, UCLA, USC… you listening?

Jnewmy12, they call him. Or maybe that’s just what he calls himself, says that being a quarterback is like portraying TB12 (Tom Brady, his favorite player). “[Like Tom Brady], quarterbacking is all about loving the game of football. Through this past year, with help from a lot of really good coaching, I have learned a lot about the game and in doing so, I have a lot more respect for the quarterback position.”

You can tell Jack loves football by joining the tech-generation and hopping on his Instagram. He also loves basketball, baseball, the number 12, and of course, Tom Brady.

Let me say something quickly…

I get the same message over and over, “Coach, I’ve got the next Peyton Manning! This kid is the real deal!” Really? Are we talking Friday Night Tykes – real deal or NBC Sunday Night Football – real deal?

Well, Jack is the real deal. Probably more so as just a flat out good kid than a quarterback. I could tell by the first text message he sent me, “Okay, I’m going to prepare a good response and get right back to you. And thanks again, coach, for the opportunity, I appreciate it!”

Jack’s junior season as quarterback for Analy (CA) HS was an epic one.  I think I’ll keep my eyes and ears open for high school football news in the bay area in 2016, maybe we’ll see a TB12-esque, excuse me, Jnewmy12 encore.