Holbrook Holds It Down 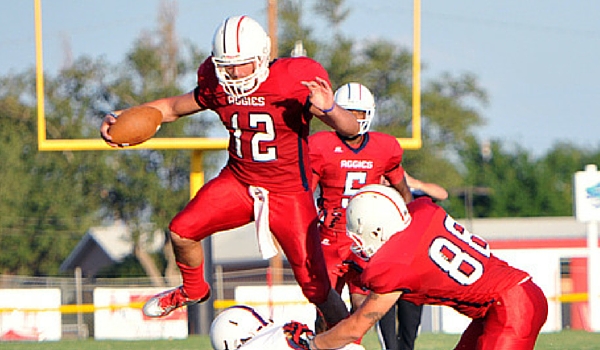 Everyone enjoys a good misinterpreted David v Goliath story. But this is about a particular, all-odds-against, no perceived chance in hell for success, David.

Here’s to the once little guys, the ones with dreams, like Chris Gardner (Pursuit of Happiness) and Kurt Warner. Mouth shut, head up, eyes forward and a daydreamed vision of their mountaintop.  This one’s for Caleb Holbrook.

Back home, on a river float, under a blue clear sky, in San Marcos, TX he’s a George Strait kind of guy. In Bloomington, IL, under the lights at US Cellular Coliseum he’s the Peyton Manning type.

Caleb is the starting quarterback for the Bloomington Edge of the Champions Indoor Football league. The who? Of the what? Haven’t heard of ‘em? What about his alma mater, Oklahoma Panhandle State University? Still nothing? That’s ok, neither did he.

After a brief stint at Blinn College, the same stop Cam Newton made before winning it all at Auburn in 2010, Caleb slid onto the radar of Oklahoma Panhandle State’s (OPSU) offensive coordinator. “I was recruited by Lucas Peters, the OC at OPSU. I had just left Blinn [College] and was looking for a place to play. They had mentioned I’d be able to have 3 years to start, I didn’t want to pass up that opportunity,” says Caleb.

One point for David.

When Caleb arrived at OPSU in 2012 there were 8 players at summer workouts. The Aggies couldn’t even trot out a baseball squad let alone a helmet wearing gridiron gang. “When I first got to Panhandle St. I didn’t want to be there. I’ll never forget my head coach, Russel Gaskamp, telling me it would take 3 years to build what they wanted,” says Caleb.

Not very flashy, huh? That’s nothing like joining a Notre Dame, USC or even DIII juggernaut, Mount Union, where the talent repeatedly crashes to shore like a surfers dream swell.

But remember, this is about the valor of the little guys, the little schools, and the pint-sized chances of a football life.. after football. “I had an opportunity to lead this team and I had 3 years to get it done,” Caleb says.

From a 4-6 record and an independent DII team in year one, to 7-3 and a member of the Lone Star Conference in year three, Caleb led the OPSU team to results, just like his head coach told him.

“Life isn’t about winning a football game, its about the moments and its about being able to relish in joy the things that god gives you.” – Kurt Warner

Caleb says, “Oklahoma Panhandle State [turned out to be] a great experience for me. It made me who I am today. I will never be ashamed to rep OPSU!”

After 7,000 plus yards, 63 total touchdowns, and an OPSU Athlete of The Year award during his college career, Caleb received a phone call. It was the National Bowl, an all-star game played at FIU Stadium in Miami, FL for the top non-FBS collegiate players. A shot for David to be seen by Goliath’s audience (Professional scouts.)

“The invite to the National Bowl was really exciting for me. I was able to go out and play with some of the nations best [in the sport] and that was very exciting. I learned a lot from that game and had a great experience,” says Caleb.

2015 brought Caleb the completion to his college career, a National Bowl all-star appearance, graduation from OPSU, and professional status as he signed with the Colorado Crush Indoor football team that summer. This hunter/fisherman from San Marcos, TX witnessed his football dreams coming to fruition. But sometimes, the picture our mind paints is much more Picasso-like than the reality.

“I went up to Fort Collins, CO [to join the Colorado Crush] and it didn’t work out as planned, ultimately, that wasn’t the place for me. I was ready to hang up my cleats to be honest,” says Caleb.

The GRE (Graduate Record Examination) and a master’s degree in Sports Psychology were going to be Caleb’s next ventures. “I didn’t chase after football, I was ready to move on in life,” says Caleb.

And then the phone rang again, this time from Bloomington, IL. See how we’ve come full circle?

“The [Bloomington Edge] reached out to me. I almost didn’t come here but I didn’t feel like the Colorado Crush organization was the end for me. So I came. And it was probably the best decision that I’ve made,” says Caleb.

Now, two games into the 2016 season, the Bloomington Edge are 1-1. Caleb made his professional debut as the starting quarterback this past Saturday in Sioux City, IA against the defending CIF champs, Sioux City Bandits. For all you former USFL and Steve Spurrier lovers, there was no “Bandit Ball” on this day.

Caleb led the Edge to a 45-41 victory scoring three times, including one on the ground, and the game winning pass with 42 seconds left.

“I know the reality of my dream of playing the game. It will eventually come to an end, [for good]. At this point, I’m building my football IQ and resume. [Once I’m done playing] and earn my master’s, I’ll have a solid [campaign] in football to get right into coaching,” says Caleb.