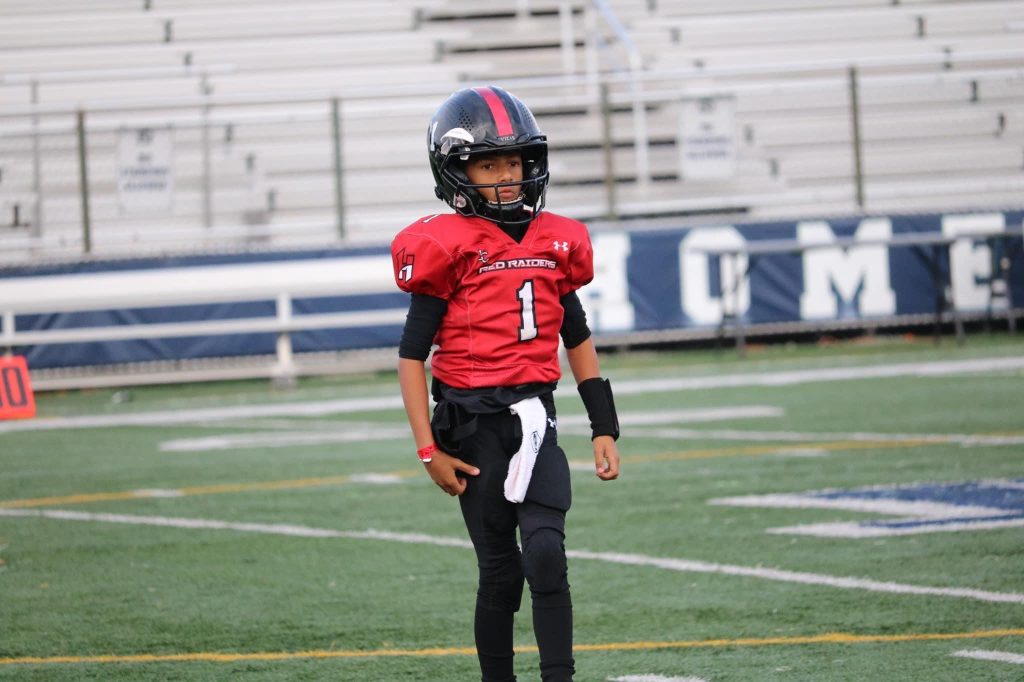 Julian Oruche is an outstanding young football player. He has played since he was five and excelled at the game. Julian, 5th Grade, 2030, Elementary school, Huntley, IL, 60142, is also an excellent student in the classroom. He is a well-rounded individual with a bright future ahead of him. He likes playing Quarterback because he wants to lead his team.

The young Julian is playing Quarterback because he wants to lead his team. Julian can read defenses and throw touchdown passes to his receivers, leading his team to victory.

His favorite part of Quarterbacking is the feeling he gets when he leads his team to a touchdown. When given the opportunity, he likes to juke out defenders and run in the endzone.

He firmly believes he must have great footwork to become a great QB. Also, Quarterback training is crucial to developing into a great Quarterback.

The Minnesota football program is a school that possesses a rich college football tradition and past, dating back to its first years in 1886. After his 6th birthday, Julian Oruche started training with Greg Holcomb at Next level Athletix. He also trains with Mike Hohensee, former Bears QB and Minnesota Gophers HOF, and Jerome Johnson for speed training.

His Midwest Boom 7v7 family coaches, Jason Krash, Michael Bertschinger, and JR Niklos, have also pushed him to read coverages and compete amongst the best in the nation. He loves all these Coaches as they continue to push him towards being a great QB. In his opinion, a great QB is a player that puts in the work in the off-season, listens, and leads through example. There is no better feeling than coming off the field as a  winner, knowing you put your team in a position to succeed. A great QB must also lead their team through adversity and show he can put the team on their back.

Bryce Young is his favorite QB because he has outstanding leadership and excellent throwing motion, and he admires his competitiveness. His favorite NFL QB is the GOAT, Tom Brady, who has the drive and desire to win, which is fantastic.

Hobbies outside of football could contribute to his development as a Quarterback.

He also believes in the power of visualization and dreams of playing Quarterback in the NFL one day. Julian Oruche is a Quarterback to watch out for in the coming years.

He likes playing basketball and also love to play with friends on XBOX. His favorite games are Call of Duty and Madden.

Julian competes in Youth Football Camps. These camps help young athletes to develop their skills and understanding of the game.

Goals are essential to him because they give him a sense of direction.

His six-month plans are to win back-to-back Super Bowls, zero interceptions, and throw for over 20 TDs.

For the next twelve months, his goals are to be able to throw over 40 yards and to compete for a national championship with the Midwest Boom 7v7 squad.

The science of analyzing an opponent’s tendencies and patterns and determining how best to exploit them is a critical component of Quarterbacking.

Oruche studies his opponents intensely to gain any advantage he can. This Quarterback is always looking for an opportunity to make a play and help his team win.

He is very coachable, takes criticism well, and always works to improve his game.

Julian Oruche has all the tools to be a great Quarterback.