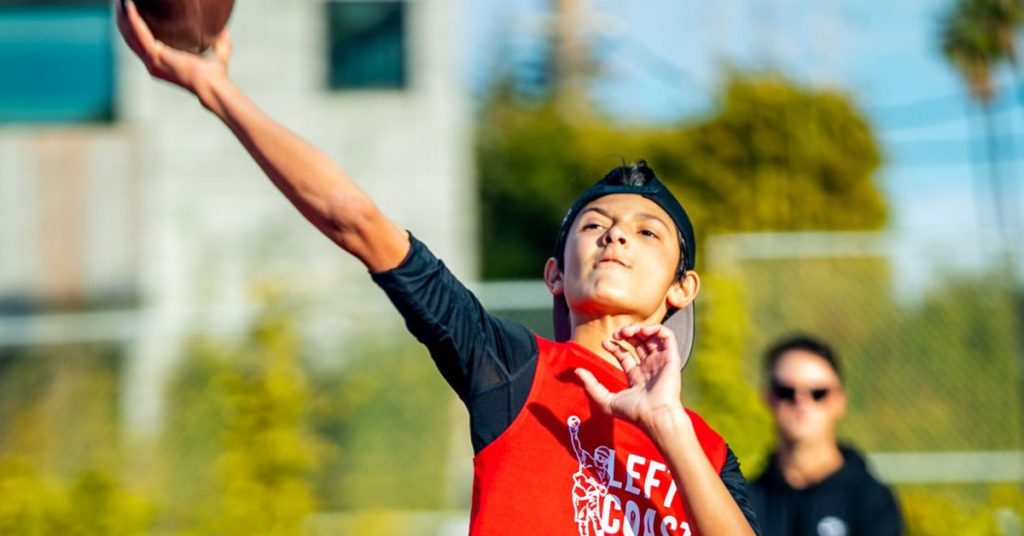 DJ Najera is a rising star in the world of youth football. A 6th grade student in San Diego, California, Najera has been playing the game since he was just 4 years old. Despite his young age, Najera has already proven himself to be a skilled quarterback with a passion for the position.

In his own words, Najera enjoys the challenges and sense of camaraderie that come with being a quarterback. He is particularly drawn to the role of leader on the field, and embraces the pressure that comes with the position. Najera believes that a great quarterback is someone who can motivate their team, work well under pressure, make quick decisions, and is always looking to improve.

Najera’s love for football extends beyond the field, as he is also a pitcher in baseball and a wrestler. He is competitive by nature and enjoys any activity that challenges him. Najera has attended various quarterback camps, including those run by Jose Mohler, where he has the opportunity to learn from and compete with other quarterbacks.

As he looks to the future, Najera has set some ambitious goals for himself. In the next six months, he plans to focus on strength and agility training, gain muscle through wrestling, and improve his passing skills and quarterback IQ through film study. For the 2023 season, he is determined to lead his team to victory in the QBowl, regionals, and qualify to play on national grass for the third time.

Najera’s journey to becoming a top quarterback has not been without challenges. He has faced game anxiety, setbacks due to moving to a new city, and injuries. But he has learned to overcome these challenges through proper game preparation, including breathing techniques and film study, and by working with supportive coaches who trust in his abilities.

Najera advises young quarterbacks to embrace their role as a leader, have a thick skin, and always work on improving their skills.

In addition to his football commitments, Najera stays active with strength and agility training and is a dual athlete in local baseball and wrestling leagues. One of his most memorable moments on the field came during a playoff game, when he was able to score a game-winning touchdown by using his agility and quick thinking.

As he continues to develop his skills and leadership abilities, there is no doubt that Najera will be a force to be reckoned with on the football field.