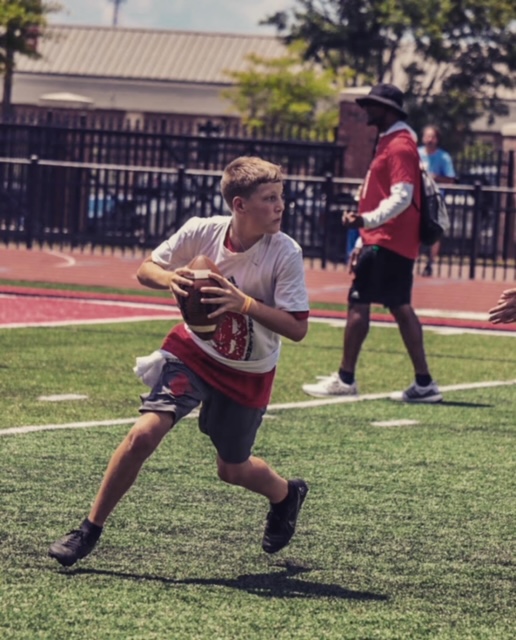 Noah Schneider is a young Quarterback who has played football since he was six. He has made the Houston FBU team for the last two years. Football University is a well-known leader in developing the ability and skill of football players in middle school and high school. Noah Schneider is a name to remember for future success in the sport of football.

He started off playing flag with his friends in the second grade. Noah also played 7on7 the same year and started playing tackle in the fourth grade.

Katy, Texas, is where Noah Schneider resides. He attends Katy Junior High and is in the 7th grade. His class year is 2028. When it comes time for high school, Noah will have many options to choose from. No matter what high school he attends, they will be lucky to have him on their football team.

The young QB has had a passion for football since he was young. He loved playing with his friends and being a part of a team. When he started playing 7on7, he knew that this was something he wanted to pursue. Noah has always been driven and determined to be the best Quarterback.

Noah likes the contact because he is a physical player, and his coaches always recommend to slide or get out of bounds when he has to push and run the ball.

One of Noah’s strengths is that he is a team player, performs better under pressure, and likes to be part of the winning team. Noah constantly works to improve his game and watches many films to learn from other Quarterbacks.

Noah Schneider is a role model to younger kids and wants to show them that anything is possible if you work hard and never give up on your dreams. Noah’s favorite QB is Justin Herbert. He likes him because he makes the position look effortless and always makes imaginative play.

Noah’s #1 hobby other than football is hunting. He has shot multiple whitetails, axis deer, rams, turkeys, and alligators. The young player also likes to go fishing with his father and spend time outside doing anything. He just started collecting football cards and has a pretty extensive collection that he has built up and wants to rip packs whenever he can.

Attending church and learning more about faith in Jesus Christ is also significant to Noah.

His favorite camp this year was the 1st ever Davis Mills QB Challenge, and he attended the Quincy Avery BlackOps camp. Noah Schneider liked that camp because Coach Quincy and the other coaches worked hard on teaching the throwing techniques and what each body part needs to be doing to become more efficient in this sport.

Noah Schneider is one to watch for in the future as he continues to develop his skills.

Noah is working on adding some weight because he wants to get ready to take some hits on the playing field. He is working on the distance throw. He wishes to add another 10 yards on his deep balls, and he can’t wait to hopefully lead the Katy Tigers to a couple of state championships.

Noah has recently become a member of the Quarterback Magazine Family, where they will follow his story as he becomes a top Quarterback.

Noah Schneider is a name that will be remembered for years to come. He is a talented young Quarterback with a bright future ahead of him. We can’t wait to see what he accomplishes in the years to come.

On August 2022, QB Noah Schneider joined Quarterback Magazine to help him with exposure and marketing and they are excited to be working with him and can’t wait!