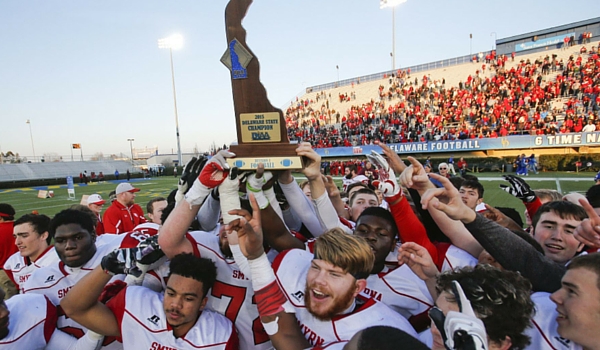 On the field, he looks, improvises, and perplexes defenses like Johnny. You’ve got to keep your eye on the number 2 on his back. If not, he turns into the.. which-cup-is-the-ball-under game, played in-between innings of every baseball contest on the planet.

He’s got a howitzer for an arm like Johnny, too. Nolan Henderson, quarterback c/o 2017 at Smyrna (DE) HS, roams the pocket and scrambles poetically like he’s being chased, by Johnny… Manziel that is, not Bravo.

Last season Nolan was no stranger to the end zone, he scored more than Dan Bilzerian on a weekend in Vegas.

He amassed 3,602 total yards and 40 total touchdowns in Smyrna’s championship campaign. Nolan felt like, “all the hard work we put in paid off and it was crazy to think we went from 2-8, to 5-5, to 12-1 and state champions. It didn’t feel real and it still doesn’t.”

Smyrna had one stumble during their regular season, Salesianum (Sallies) (DE) HS in week 3. Following back-to-back shutout victories of 50+ and 60+ points, Smyrna watched the scoreboard almost run out of room as Sallies dropped 76.

A knee-buckler, yes, but that didn’t stop Smyrna’s highflying offense. Lead by Nolan, the Eagles out scored opponents 550-150 during the regular season and 118-71 in the playoffs. That’s more than the Super Bowl Champs, Denver Broncos reg. season total of 497 points, and that was over 16 games.

“We just made more plays,” Nolan said, after all, that’s what “the position (quarterback) means to me; be a leader, make plays, and bring the best out in your teammates.”

Along with his leadership, Nolan is quite the student of the game, says head coach Mike Judy. “He is extremely coachable- the kid has a work ethic second to none. He is the first person in drills, [and] stays after practice with receivers to throw extra.”

A great work ethic, leadership, and being coachable all seem like pretty good things to have. Especially when you find yourself entering overtime in the state championship game against the team that’s responsible for the sole L on your record.  That’s right; Smyrna met Salesianum for the state title.

Tied at 26, Smyrna erased a 12 point first half deficit by scoring 20 after halftime. “Heading into OT, my state of mind was very confident. We dominated the second half and felt like we had all the momentum going into extra time,” Nolan said.

“Immediately after we won, I can’t explain my state of mind. The way we won was amazing and it took time to sink in. [But] I feel proud, of our whole team.  [After beating Sallies, the only team we lost to] It shows we improved over the season and out worked them. That loss is a big reason why we ultimately won. We used it as motivation and told ourselves we wouldn’t let it happen again. Our defense stepped up and they were a major reason why we were able to win that [championship] game. From the loss to the championship win, we were a completely different team.”

Off the field, he is nothing like Johnny. “No sir, no off-field issues with me. I’m committed to football,” Nolan told me.  That’s always good to hear. Although, Nolan hasn’t been featured on ESPN, beat Alabama in Tuscaloosa, or drafted 22nd overall in the NFL Draft… yet. But, as we all have, Nolan has watched the (hopefully temporary) fall of Manziel and learned, at least a little from it.